What’s in a Word? The Problem with ‘Development’

What comes to mind when you think of the word development?

From cognitive to economic, social to sustainable – the word development has many variations and, depending on where you are in the world, what it means to you might be different to what it means to someone else.

In our podcast episode on ‘What’s in a Word? The Problem with ‘Development’, we speak to Dr Karen Pashby from Manchester Metropolitan University on public discourse surrounding development, and how this may impact Development Education. Karen teaches an undergraduate course on International Development, Education and Colonialism, and in the podcast, highlights the problematic imagery her students have come to associate with the word ‘development’ when they first start her class. From starving children to deficit images of ‘underdeveloped’ places, Karen refers to this type of imagery as ‘development pornography’, which is reinforced both in the curriculum through textbooks, as well as on TV.

In this episode, Karen explores development through a post/de-colonial lens, and offers ways to critically engage with and challenge these ideas, referring to Vanessa Andreotti’s HEADS UP framework, as well as her own work on co-creating a teaching resource that addresses complexities in global issues to open up possibilities, rather than just promoting simplistic responses.

Listen to the full episode here.

Bridge 47 · What's in a Word? The Problem with 'Development' with Dr Karen Pashby

The Power of Language

Language is a powerful tool that can shape the way we think, and how we see the world around us.

The language of International Development has been particularly pervasive, especially when it comes to the ‘developed vs developing’ binary, and how it is used to classify countries based on their economic development.

While seemingly harmless, the historical context behind this binary and the narrative it perpetuates is a good example of how the continued use of the word ‘development’ can be problematic, particularly in the context of development education, an educational process with the purpose of creating an increased awareness and understanding of the world around us.

The developed vs developing binary can be traced back to the post WWII era, an important part of history that helped shape modern western understandings of development. During this time, not only were nations struggling to recover from the aftermath of the war, this was also the beginning of the end of the colonial era. 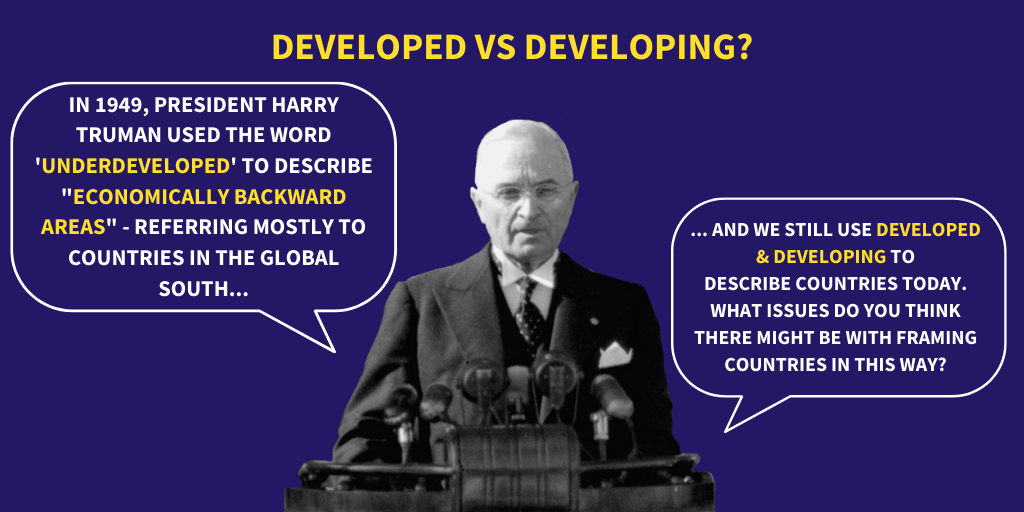 In 1949, newly elected American President Harry Truman gave an inauguration speech, where he used the word “underdeveloped” to describe “economically backward areas”- referring mostly to countries in the global South. By doing so, President Truman altered the meaning of ‘development’ by introducing ‘underdeveloped’ as its opposing category. Grounded in this dualistic approach is the idea of change, of movement from one stage to the next. And when used to describe nations, it implies that development and progression is a linear and universal process, and that all countries exist on the same level playing field.

This presented a new way of reconfiguring relations between the global north and south. Moving away from previous coloniser and colonised relations, the post WWII era saw the emergence of the United Nations and the newly established Universal Declaration of Human rights. The underdeveloped vs developed approach brought forward a new form of social organisation, albeit one where some countries were some countries were still lagging behind, but with the ever-present hope of catching up.1

The problem with this world view is that it naturalises a linear and universalised form of development, that is firstly, a uniquely western concept, and secondly, does not acknowledge the global north’s history of exploiting the global south for labour and resources.

When we continue to use the word ‘development’ in the context of Development Education, we arguably continue to teach and reinforce a world view perpetuates the superiority of some countries over others.

At Bridge 47, our advocacy work focuses on the importance of global citizenship education and all forms of transformative, value-based education in order to achieve the vision of Agenda 2030 set out in the 17 UN Sustainable Development Goals.

Under a global citizenship education approach, learners of all ages are equipped with the tools to critically examine systems of power, question their assumptions, and localise their own impact in the context of complex global issues. Framing education in this way steps away from damaging universalised narratives of development that reinforce unequal power relations between countries, and ultimately offers the kind of education that we need to "work together to extend a notion of responsibility and ethical commitment to the wellbeing of all people”, as stated by Dr Pashby.